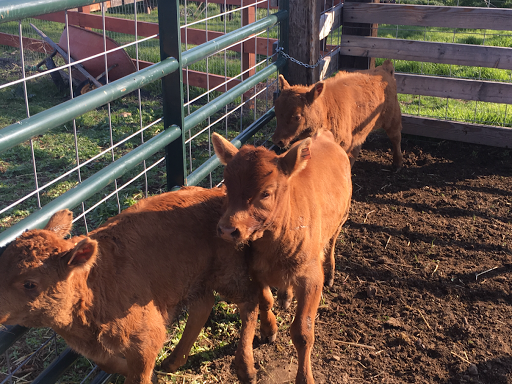 It was tag and band day Sunday. My nephew volunteered to come out and help me and the weather was finally cooperating. I truly did not want to roll around on the ground in four inches of mud with the calves. While trying to get them tagged and banded. We were going to start out the day by digging channels for the sorting chutes in the barn but there was a ewe in there with brand new twins and she was trying to pass the afterbirth so we opted to do cows first. Their is a convoluted order to everything that has to be followed. First, we had to push the sheep and horses out of the barn lot and into the upper prime pasture. Secondly, we needed to put the alpaca back into the orchard and shut the gate so we can run the cows through the front part of the property. The dogs did very well and stayed where put until we had walked the alpacas to where they needed to go. Next we went into the lower pasture and shut the gate going down to the schoolhouse pasture. The dogs were running all over and not paying attention. It went downhill from there. Mouse would not listen!!  I should have brought our 30 foot lead rope. I was screaming and swearing with minimal effect. The cows did not go through the open gate by Donna’s house. Instead they went all the way along the hillside behind our house. We then opened the gate into the barn lot pasture and Zeke pushed the cows while the rest of us kept them from running back down the hillside. They went into the barn lot fairly easily. Now this ended up being a better plan for moving the cows but Mouse doesn’t get credit for this despite it being his fault.
We used the dogs to push the cows into the backside barn lot. There was one cow that just would not go. I finally sicced  the dogs on her. She came pretty close to kicking both dogs a couple of times. After about 30 seconds I called the dogs off and they did come back, miraculously then she ran for the gate and went in with the rest of the cows. It’s hard to defend yourself when one dog goes for your nose and the other your tail or back ankle and they switch every time you turn. Occasionally, it is good for the dogs and cows to realize who is boss, me. Everyone just needs to do what they are supposed to and all will go well. We locked the dogs in the hay room of the barn and sorted out cows. It only took us about ten minutes to get all three calves isolated into one pen in the corral. Heath grabbed the smallest calf, a little boy and we tagged and banded him.  The next calf was the middle sized one another boy who was tagged and banded. His testicles were big enough I had to squeeze one at a time through the rubberband opening. This one was not as easy and we both got peed on. The third one was another boy and the largest of the group. Heath grabbed him around the neck and wrapped his legs around him and pulled it down. He couldn’t pin it but it wasn’t going any where. I piled on and we rolled it onto its side, another boy!  Something was wrong in whoville, the largest calf had a scrotal sack the size of a peanut. No testicles present and I had to really search for them. I only ever found one despite repositioning the calf. It was about six inches toward its head under the skin, no where near a scrotum. We left it and tagged it in the right ear. All our tags usually go in the left ear. This way we know something is off with it. We then ran them out onto the back hillside with the dogs. The dogs were not listening well. My voice is already starting to crack a little from the yelling at this point. 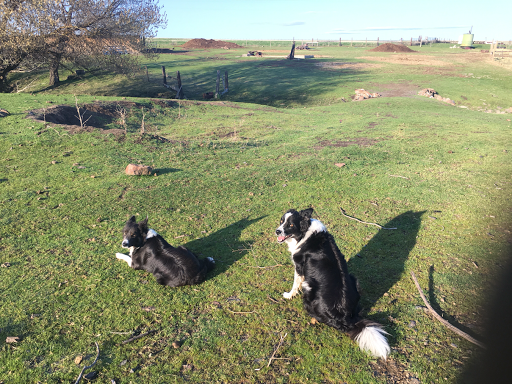 We then had to go into the barn and dig down into the straw and create paths to lay the panels down onto to create sorting pens and pathways. This took almost an hour for us to get all ready for the sheep. We had to tag and band the two newborns as they would not leave the barn, one was a boy the other a girl. Once the barn was ready we realized that the sheep would have to be ran in through the shoot. Normally we just push them into the barn and move the panels into place but after digging the trenches this was not possible. We had to push them into the barn on three different groups, shut the barn doors then get them all to go through the chute to the pen in the back of the barn. We got it done. I had to put Mouse on a fencepost tied with bailing twine. He went after one of the new mommas after she stared him down. He took offense and tried to jump on her. I called him off then made him stay in one place while we worked. He did not like that. Then when we had everyone in the barn I brought him in and tied him up to a sheep feeder. I eventually had to tie Zeke up also as he kept trying to help when we moved the boy sheep past him.
I like to keep the dogs present as it helps them get used to the excitement and jostling of the animals. We kept taking every boy who was weaned off of the main herd and tossing them into the back barn lot including the ram. We are going to give the sheep a three month breather to allow everyone to get fat and hopefully synchronize the ewes so the lambs come all at once. We ended up with 26 big boys, 11 baby boys, 46 ewes and 4 baby girls for a total of 87 sheep. There are at least 10 more pregnant ewes getting ready to deliver so we should get at least another 15 babies for a total just over 100. We want to keep the ram and 30 ewes. This will leave us selling 70 animals all at once. In three months we will take pictures and post them on Craigslist for one buyer to take them all. We will cull out 16 ewes and replace them with some of our last years lambs.
Our best luck has been with selling large flocks all at once. There are buyers with a ready market who want a bunch of animals all at once. So that is going to be our target market. Hopefully we have success.
Once we pushed the ewes and babies back into the upper prime pasture we moved all the boys onto the back hillside. After Zeke failed to turn the herd twice because he was playing instead of working I had to put him on the leash and work Mouse off of it. We finally got all the boys onto the back hillside.
It was lunch time!  Chili and weiners!!  A manly meal. Back outside to open all the gates and reset the barn panels to their normal nonsorting pattern. It took about six hours to do all this.
I also fixed one gate that was dragging on the ground before coming inside, showering and taking a 2.5 hour nap!!
I pity the person who will be digging out the barn. I am going to have them toss straw out the front and back door in an attempt to minimize the travel distance to an exit. Hopefully, this will help speed things up.
We had to go out in the evening to make sure all the babies had come into the barn and weren’t still hiding in the upper prime pasture. There were no holdouts.
One whether is biding his time in the corral waiting for his new owner to come get him this week. The corral is too short at 5 feet. We had one sheep jump out yesterday so I need to add at least one more railing. It’s crazy how high they can go when motivated. 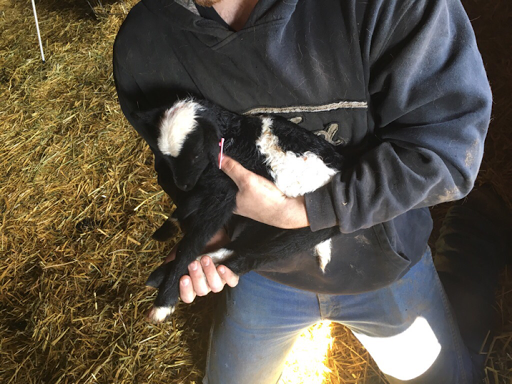 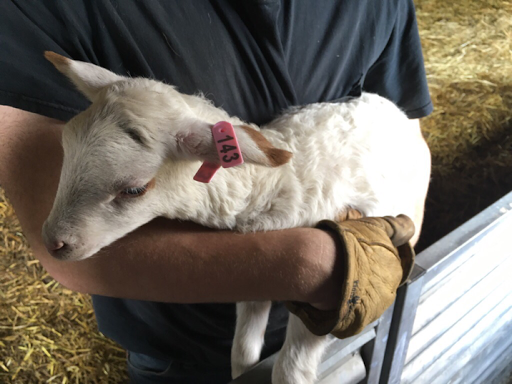