Friday was the day to start back up outside. Yes, I still have painting to do inside the house but we still have baby chicks in the dining room and Annmarie doesn’t want me poisoning them. So that leaves chores outside. I considered working on the bull enclosure in the barn lot. I need to drill a bunch of holes in the dirt if I can. The trouble with this is the Bull is still causing me troubles by trying to get to the isolated heifers. So the fence up the back hillside has become a priority. I will run a fence from just behind the house up the hill to the rock crib you can see in the below picture. This is going to be brutal as the the entire hillside is one big rock pile with a solid rock bluff in the middle.

Before I could make it to the back hillside with the tractor I decided to try and level off the land behind the barn. It is still too muddy, but while I was back there I decided to dig down both old paths that got worn down. This will make it easier to get to the barn when its muddy out. I did notice that my board keeping the dirt ramp in place is starting to break. I am going to have to tear it out and put in a couple of railroad ties soon. I need about another 35 railroad ties. Unfortunately, they don’t give those things away. I have been watching facebook classifieds and Craigslist but have not scored yet. I found one place recently but the poles were used in a vineyard. Those are usually only 3 inches in diameter and I need at least 6 inch. 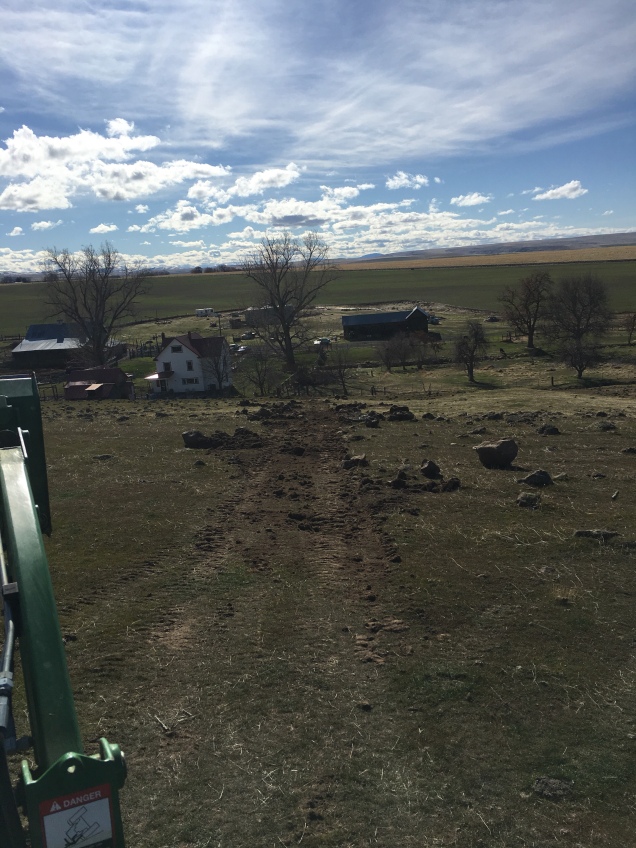 I spent almost seven hours dragging the old road to clear it of rocks and create a wide spot for a gate. I am thinking about installing a 12 foot gate, another 4 foot diameter rock crib and a 6 foot human gate near the house. I will put another 12 foot gate on top of the hill. I also drug a path down the hillside and tried to clear out all the rocks in the way. I managed to get all the rocks cleaned out of a small four feet strip.

Once I had the fence path cleared and I attempted to create a few level spots for the wire cages I went and got some old cow panels. I was able to reuse the ones I had just gotten from the same place I purchased the culverts. I drug five panels up onto the hillside behind the tractor. I then cut off just the end vertical piece. This allows me to kinda roll it up like a piece of playdoh. The problem with this is it doesn’t want to go into this shape. I also have to put a lot of effort and body weight into the process to get the metal to form a circle so I can then bend the horizontal ends around the opposite vertical creating a ring. This ring then gets a wooden post nailed in it and filled with rocks. Once it is full of rocks it is virtually indestructible.

I was bending the third one when I made a mistake. I had kinked it in half and was trying to get it to form a circle. It just was not going so I jumped on it and ended up rolling up onto it and down the hill. Did I mention I was doing this on a steep hillside? Luckily, I did not go over the entire top and get thrown over the top and onto my back. Instead, at the zenith I went off the right side and came down onto the ground on my hands and knees. I did mention the entire hillside is covered in rocks? It hurt my knee a lot, I hollered and rolled around as the song Tainted Love played. It hurt something fierce. I finally managed to get it to a dull roar and just laid out on the hillside after finding a rock free location. I almost went to sleep but I was afraid that Annmarie or my mother in law would spot me and think I was injured and call the ambulance. So I gave up on the dream of a nice pleasant nap and got up and finished two more wire circles.