I had big plans for Saturday, I was going to move 25 tons of hay into the barn. To accomplish this gargantuan task I had enlisted the help of three teenagers. That is a lot of hay and I have yet to get the hay elevator working yet. It needs to be welded on and since I have signed up for the welding class this fall I am unwilling to pay to have the current five things (kitchen table, horseshoe gate latches, welding table repair, stairway fixation point and hay elevator) that need welded completed. I would rather pay the $350 and buy my own welder and save myself a few hundred dollars. This means another year of muscle power to get all the hay manually stacked into the barn.

I have decided that I need to make a key of knick names and keep it on the refrigerator just to keep names straight in the blog. I had to go back and search the archives to make sure I kept the same names for two of my helpers Saturday. I had simply called them the “Brothers”. This lumps them togoether and is not very descriptive so I have created an addendum and will now be referring to them as Thing 1 and Thing 2. I recognize this may seem odd but trust me after spending all day getting them to work together, defend each other, pick on each other, telling them not to whack on each other with sticks this is very apropos.

I sent a text to my hay supplier stating that I would not be picking up hay as it was raining! Unbeknownst to me Saturday had a 70% chance of rain and it turned into 100% for most of the day.

The Brothers showed up early so they hung out while I made breakfast. I managed to talk them into some sausage eventually. Last time they were out I made homemade sourdough waffles for everyone. My third helper arrived and we all headed out to the barn. I was not going to build fence in the rain and mud but I figured we could do something in the barn. There is always something that needs to be done. I had the late arrival start on cleaning out the hay room while Thing 1 and Thing 2 started to sort lumber up on the gangway. I wanted it separated out and all the 2×6 removed so we could extend the gangway over all the sheep feeders. This would let me sort out all the lumber available. Its hard to find stuff or even know what you have if you cannot see it or are just guessing about what is at the bottom of the pile. I went to the old house to grab tools and to string up a couple of extension cords to the barn. It took some direction to get the Brothers to realize what a 2×6 actually looked like. We finally managed to get them all down on the barn floor so we could see what was usable. I had kept all the 2×6 from the roof section that had blown off the barn. They had a lot of splits and cracks in them but I was able to find good usable wood and we worked on getting the gangway extended. Thing 2 and myself extended it another 24 feet. I had Mr. Consumer and Thing 1 take the hay elevator out to the lamb shed and lash it to the upright poles horizontally. I have yet to actually go out and verify how this turned out. They came in at one point and asked me how to work a tie down, I showed them and sent them back out to finish the job. Thing 2?has some mechanical ability so he helped me with the construction and eventually was able to do the cuts for me while I installed them. There was lots of hollering about pinching the blade, creating a workbench side, starting the blade up to full speed before touching the wood and to position himself directly in line with the wood to allow for a straight cut. After a calm discussion or two I would holler “pinched wood!” “Start the blade first!” “No wonder you cannot cut a straight line, you have to be behind the side you cannot just reach to the side!” I did actually congratulate a job well done, occasionally. He was much improved by the end of the day. 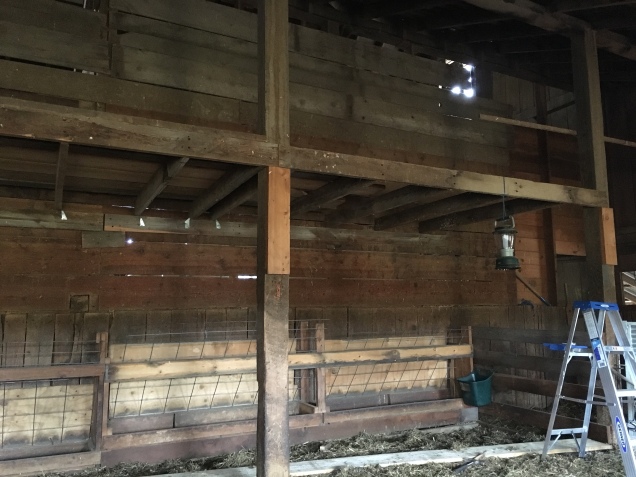 Once this was done I had the boys help me remove all the wood from the L shaped granary and pile it up in the barn. Mr Consumer stood by the barn door and tossed all the scrap wood I handed or tossed his way outside to be burnt. The Brothers had to carry all the large pieces out to the barn floor. I am positive that Mr Consumer had figured he had the best job until I spotted a large black and white fur ball on the floor hidden under some wood and informed Mr. Consumer that he would be disposing of the dead skunk! He did bitch slightly but I told him he had made a choice to take the easier job of the three and his choice may have been the easier choice but the consequence of said choice was that he got to move the dead skunk as his job was to remove the trash from the barn. We had a couple minute discussion on how sometimes our choices lead us down paths we don’t expect but it was our choice and we have to live with our personal decisions. I had to keep digging through the lumber to get to the body as it was buried. Turns out it was just a furball from the packrat! He did not have to deal with a dead skunk but the anticipation and dread served its purpose.

I had Mr Consumer and Thing 1 go out and remove the “stairs” (pallet concoctions that will hold a horse!) and sweep under and behind them. Every year they had slid away from the barn a couple of inches. I blame the horses for this but regardless there was about an eight inch gap filled with straw. They cleaned it out and I screwed in a 4×4 at the front of the stairs once they were back in place. They can no longer slide away from the wall. This will make Sarah and Annmarie happy.

The Brothers reminded me of lunch time at 1205. They have worked with me before and know that one must be vocal if one wants to get fed on time. Mr Consumer brought his own lunch. I did not expect this and ended up with an extra 18 inch hoagie in the fridge. We ate on the front porch as Mr Consumer and Thing 1 had started digging feces covered straw out of the barn and did not smell the best. As we ate lunch I watched two different washed and cut fruits in separate bags emerge from the lunch pail. Meanwhile, the Brothers and I are wolfing down meat and cheese hoagies and Doritos. I enquired as to whom had prepared his lunch? Drumroll please! What 16 year old boy puts TWO types of fruit in his lunchpail? You are all correct, his mother did it and a name was born, Mr Consumer. He ate every bit of his lunch. 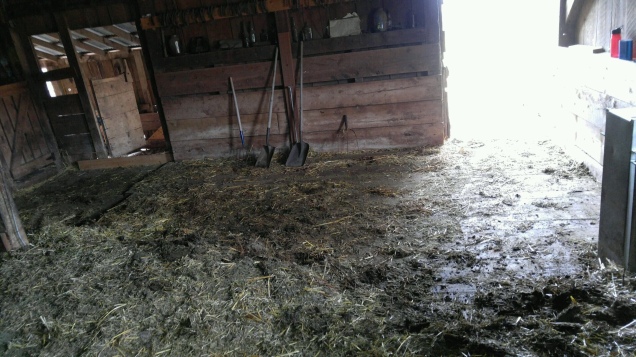 This L shaped room just needs a door on the outside of the barn, a door on the inside and we need to move the grain separater over to the old chicken coop. Its an antique, of which I have no idea what I am going to do with it but for now it will be moved to the old chicken coop. I also have a four inch auger almost 28 feet long in two sections. All of this needs to be moved out. None of that can happen until I get the Bull enclosure completed.

Mr Consumer got both hay rooms organized and cleaned out. They are all ready for new hay to be placed. I think we have enough straw to get through the winter.

I ended up raising the door height on the momma enclosure and raising the back wall. This should prevent the sheep from jumping out now, I hope. The back Y gate also had four inches cut off of the bottom. I had not accounted for any straw being on the ground when I installed it the first time and this made it near impossible to work the door. I also cut off an inch from the bottom of the tack room door for the same reason.

After the long day I was cooking myself dinner and looked out and spotted this brand new baby calf on the back hillside! It was standing up and walking around while momma just sat and chewed her cud. 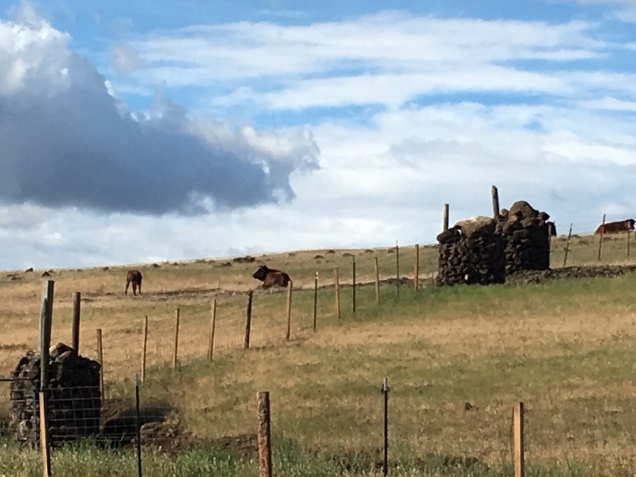 It was an incredibly productive day and now I need to get the fields mowed and disced again then I can start in on the bull enclosure. Those fields need to be ready in the fall for alfalfa. A friend of ours is looking into getting me 150# of Round up ready alfalfa. I have a Monsanto ID number now so I can buy it. I am told it is very expensive but we need it as I will be able to spray Round Up on it to keep the weeds and cheat grass under control as it establishes itself. We only need one cutting from it next year.