It had rained the days before so we did not want to cut any new hay. Instead we planned on turning hay. I had a funeral to go to so we got Tex all set up with our new 5 foot power rake. He will turn all the hay this Saturday. This rake will let you pile it all up into a row. I had visions of Tex just following the rows that the mower created. he did one better! He went down one side of the row then at the end of the row he turned around 180 degrees and went the opposite direction allowing the row to double in size and cut the number of rows in half. This was very clever and not something I would have thought of had I done the turning. 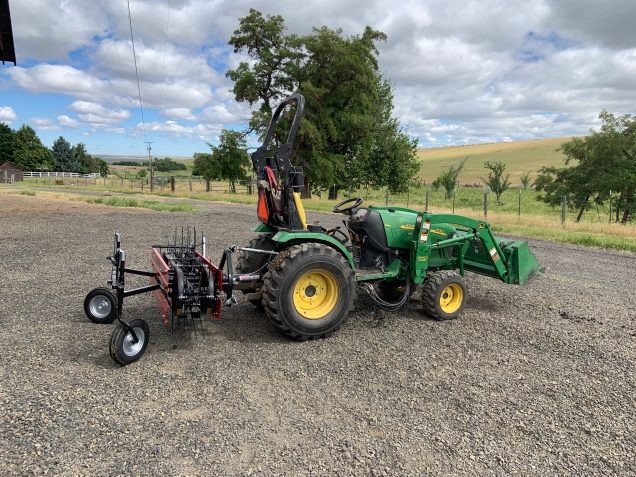 Before I left in the morning Tex and I planned out our needed improvements to the machine shop. One of the rafters is broken, we need a bunch of plywood to line the hay room to keep the round bales in and the loose hay out of the new gravel area. We also need to install the bolt and screw organizers that were laying on the floor of the machine shed. I need to get all the bolts and screws organized and out of the multitude of drawers I currently have them in. I am also going to hang some bin organizers on one wall. I need to mount these to a sheet of plywood, so we will be hanging a few sheets up on the walls for future use. We also need to make legs for the new free countertops I managed to snag on the way home this week. Every once in a while those “Free” signs are a big win.

I went to my least favorite big box store and picked up plywood and lumber with a few Knick nacks. I had to wait 30 minutes for help loading plywood as there was only one guy who could do it. There are reasons I dread Home Depot, but I spend so much money there I get the zero interest for 6 months on my charge card and always pay it off in time. I love that deal!! Plus on Saturday at 1600 there is no other place in the area open to buy lumber.

I knew I needed some more baling twine, but with micro equipment I was unsure where I was going to get it. The salesman on the phone seemed to think I could get it anywhere. So I found it at a local store and bought two small, 5000 feet rounds. They did not have Jute cord like the free roll I got with the baler but they had lots of types of plastic cord to pick from. I was not sure if they would fit but its all they had and something is better than nothing.

When I got home and published the blog last night Annmarie spotted the uneven gates on the new stretch of fence. She mentioned that would need to be corrected tomorrow. I told her hay came first but I would think about how to fix it without spending 10 hours reworking two rock cribs.