Annmarie and I have moved several of the old ewes into the momma area so we can feed them a supplement.  One of those ewes, old brown Lead ewe, had a single girl lamb whose is super mellow.  We will be flagging that lamb to keep as a replacement ewe.  We are looking at flagging and keeping another 8 ewes to replace all our old ones.  We will let the old gals hang out till they drop or get super sick.  We like them and they have been with us since the beginning.

We also have one old ewe who lost a bunch of hair.  She also has a lamb.  It’s weird and we have her in her own confined area and are feeding her a protein supplement.  We have been using some fungal spray on her but it is not changing anything and no one else has it so we think its nutritional as she is one of the old Baker girls.  Her lamb looks great and is doing well so we will keep her isolated for a while and see if we can change her condition.  We are surprised by how late the babies are, the ram must have taken a couple of months to figure out what he was supposed to do once we put him back in with the herd last time.  I suspect he needed to run around and lose some weight so he could do his job!  He was very fat last time.  He is almost as wide as he is long now!  Super fat! 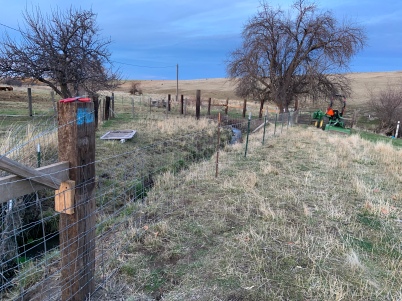 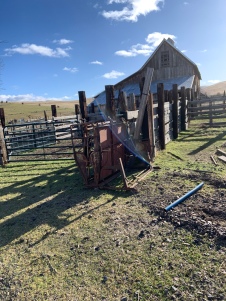 We knew we were going to work cows on Saturday so Friday I went up and worked on one of the short sections of fence I am allowed to complete this year.  I managed to get the two railroad ties set in gravel, the H braces installed and strung up the woven wire.  It’s enough to be able to let the cows into the orchard and not worry about them getting down into the ditch.  I will need to hang a gate on the end and I am going to have to drive T posts horizontally into the bank for 4’ so I can run a cable across the bottom of the ditch and attach the panels with clips.  This stops the cows from just lifting the panels with their horns.  This needs to be done soon as the cows are working the panels already.

I also managed to spend some quality time with the mistress dragging the driveway.  She had it all smoothed out in under two hours.  It is a lot better.  In the next year or so we are going to have to have some gravel brought in on a belly dump and let out over the entire length of the driveway.  It’s about $225 a load now and it takes three loads to do the entire driveway.  I even managed to find time to wire in more light panels in the machine shed.  I have an outlet for the “Buggy” in place and two light switches and boxes wired.  I ran out of boxes and need to get more so I can finish wiring the shop.  I have two more outlets and two more light boxes to install.  I am looking at high output LED lights that I have wired to be on one at a time.  This will cut down my power usage and demand as I only have 20 amps available.  I just need lights and a enough power to run one plugged in item.

Saturday we worked the cows, the Child came out to help and a work friend the Gimp came out.  The Gimp is on light duty so their vote was for us to use the calf table instead of wrestling each calf down to the ground wrestling style.  We thought we had three calves to tag and band.  Once we had them all into the corral we discovered that one of the three had already been tagged but the tag was buried in her ear.  I had to buy new tags and I got large tags that cannot hide in the ear.  This has been an ongoing problem for us.  It took me about 25 minutes of messing with the calf table to get it to work.  Lifting it with the tractor does not help it and I had to use wire brush and lots of WD40 to get the neck piece to move up and down.  I really need to think about putting it on wheels and pouring two concrete channels for the table to move 10 feet to either side of the corral chute.  Then you could just push it to the side when it is not needed.

The first calf went well but the second one was another one nutter.  I could not find the second testicle.  I was digging around for 5 minutes with no luck.  We tried moving his leg and still no luck.  So we will try him again in another month.  This time he will need to be caught old school so we can roll him around on the ground as I look for that second testicle.  We sorted off the Bull and put him in Alcatraz with the other five steer.  He hollered and screamed for only a few hours and has been very quite and content today.  It’s kind of weird. 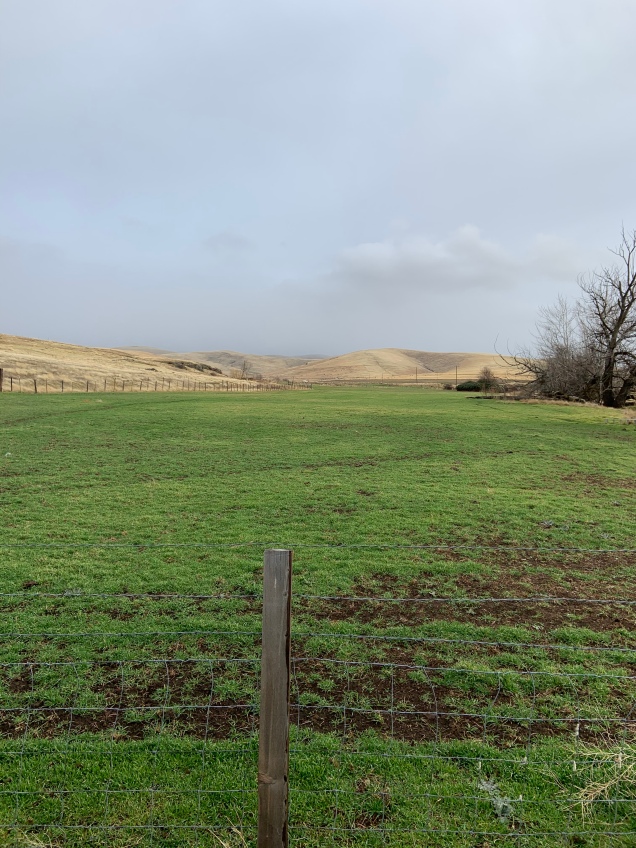 I drove up to the other side of the old chicken coop to look at the spring head, front spring runoff and our fall planted grass field.  They all looked great!  I am hoping to get 2.5 tons/acre of hay in the spring time off of our newly planted fields.  I just need to get the Buggy battery adaptor and trickle charger installed and then install the upgraded spray pump.  The Buggy needs to be ready to spray this spring.