Annmarie tells me that it is time to start working inside again.  I went to the tile store and had to get some input on what color of grout to order for our backsplash.  Annmarie and I chose the brown color.  I am using sandless grout for the backsplash as all those little squares will get some grout around them.  Luckily, I only have to do a 4’x4’ section for the backsplash.  We have some fancy edge tiles and a chair rail to go across the top to install also.  The chair rail will hold the mirror that I will be mounting on the wall.  They had to verify the tile was still being made as we had picked it out a year ago.  I was going to epoxy a table top for our bathroom vanity but instead I am going to trace out the top pattern and order a small piece of granite to sit on top, it will be less than 4 square feet.  I will use the backsplash tile to pick the granite color and have them drill a hole for the drain and the faucet.  I will glue the granite to the top of the vanity.

I purchased all the mastic and hardiboard needed for the floor and now I just need to patch the walls and start laying in the hardiboard.  I am going to use Redgard as my water proofing membrane.  I just need to roll on a few coats and then I can tile over the entire floor.  So I will be working on that this week.

I spent most of the day on  Saturday outside working on the tractor.  I was supposed to be inside working on the upstairs bathroom but had to go outside to feed the sheep and cows.  Annmarie and had gone out first thing in the morning to check for babies and one of our old Baker girls pushed her way into the momma/baby area.  It was our old and infirm ewe so we let her.  She went outside and fell over, and could not get up.  We decided she was just too old and weak.  I came out later and put her down with a bullet to the brain.  She went up onto the bone yard at the far end of the property.  When we decided that we also sealed the fate of our other ewe with the lost hair.  She is losing more hair and has failed to turn around.  Her baby looks great so  we are going to cull the momma at 3 months age on the lamb.  That will be two culls for the year already.  We think we have at least 4 more this year.  We will be saving ten female lambs to use as replacements this year.  Most of the ewes  will come from the July 2019 bunch of lambs.  We are saving the old brown ewe’s baby as it is a little girl and if our old #1 ewe has another female we will save her also.  Choosing for temperament and mothering ability has benefited us and created a great herd to be around.

I ended up feeding both groups of cows.  I tossed my large hay hooks and have had to use a strap to try and drag out the large bales from the machine shed.  It takes longer to get the strap in place.  Now that I say that I may be able to use small all metal hay hooks and a chunk of chain.  I may try that next week.

When I went up to the boneyard I ended up dragging the upper fence line again to clear any rocks.  I did this last summer but I had a few rocks still in the path.  I now have a rock and debris free zone about 5’ wide next to the upper fence.  This means I can run the pull behind mower along the fence and not hit anything.  I like to do this to create a fire break alongside the fence line in the spring and early summer.  I ended up dragging the new fence line I cleared last summer also.  I also smoothed out a section for a gate and cut into the hillside so I can install a large rock crib for a gate and fence ending point.  All the moisture and moderate temperatures made it very easy to move the dirt and rocks around.

I even drug some dirt around in Alcatraz to clear the dirt away from the concrete footings of the old granary.  The cows were trying to bury it on one end and dig a hole under the other end.  So I just moved the dirt from one corner to the other.  At some future point I would like to work on this footing and build a floor and some walls.  This may end up being a retirement project but I would like to do it at some point.  I will also need to build about 120’ of stiff fence to keep the bull and ram out of my work area.  This is a project for another day, maybe another decade. 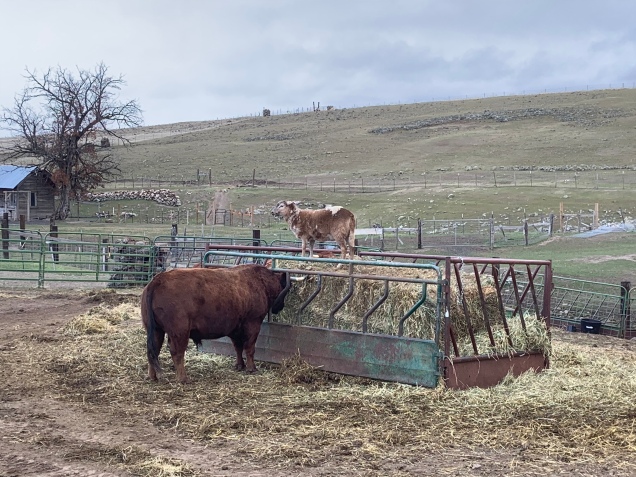