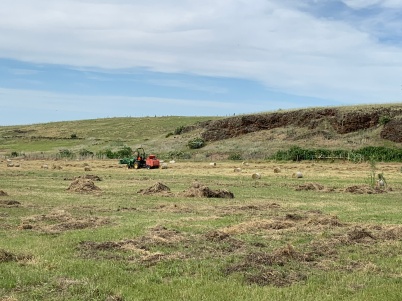 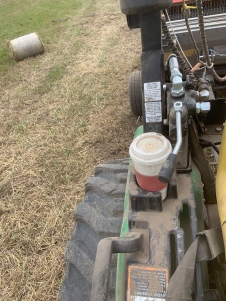 Friday was spent haying some more.  Annmarie spotted a female calf from our bedroom window and then when she looked with the binoculars there was no ear tag!  We knew the cows were hiding more calves but had finally given up and figured they died.  Nope, now I need to tag it, luckily its a girl.  I managed to only shear two shear bolts all day, one upper and one lower.  The upper ones are a lot easier to fix!  I like to take my fiber directly from the soil.  The coffee gets pretty thick when the dust starts to fly.

Mr Professional and the kid started picking up bales from the field.  I think they are dry but Friday night I started to hit some wet patches.  I truly do not want the barn to burn down. After much discussion I am again using the horse training corral to store hay in.  They are out in the open, and since they are wrapped they won’t absorb a lot of moisture.  This was the best plan and the safest.

The micro hay equipment is nice, once you get used to it!  We are learning a  few things, like don’t row the hay or make the rows too high.  If you do drive over the hay rows watch the drive shaft picking up hay and wrapping around the driveline.  You will need to cut that off before it becomes a problem or it will stall out the tractor and it is a lot harder to get out when it is jammed in there.  Rocks are bad, the baler does not like them.  I am going to have to pick up rocks in the far upper field.  There are too many loose big rocks, even fist sized is too big.  The netting wrap is great but you really have to pull on the cord for about 3 seconds to get the friction roller engaged.  Once the bail is wrapped a couple of times you can let go and the machine does the rest.  The hydraulic rear lifting is amazing.  This is crucial when something goes wrong or you shear a bolt.  On the other the hydraulics were self contained and the pump was reliant on the pto so when you sheared a safety bolt and needed to lift the back of the baler it had to be done by hand and its very heavy.  Keep lots of shear bolts on hand, I recommend 36 of each kind.  It’s a stupid reason to have to stop and go to the hardware store to try and find them.  They are hardness 8.8 which is hard to find, everything easily obtained was harder and you don’t want a harder shear bolt.  Clean out both sides of the baler every time you shear a bolt.  This is probably overkill but you have the covers off anyways and it makes me feel better.  Clean off the equipment every night with the hose, get all that stuff and dirt off your machine.  Remember the bale counter is triggered every time you lift the tailgate on the baler so if you keep breaking stuff and lifting the back the count can be off by quite a bit.  You will need to count bales when you load them unless you never do anything wrong and all goes smoothly.  I have been unfortunate and have not had this problem.  Don’t take a super tight turn as you can catch the pto shaft with your rear tire, this is not good.  Don’t be surprised when you start out if the bale rolls forever.  It takes a bit to learn how to work the baler, we have some bales with 30-40 layers, they will be very hard to get into.  The average is about 8 wraps very reasonable. 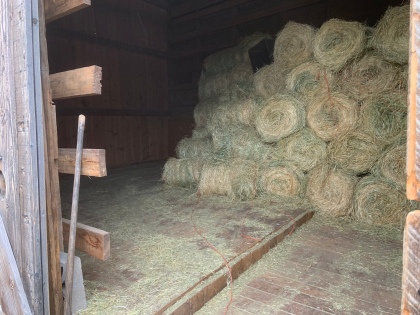 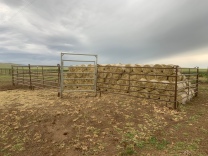 The kid left early afternoon and Mr Professional was done loading hay, so he went out to bale hay while I went out to pick up bales.  I went up to the far field and picked up the triticale. We got 61 bales, 2400# not exactly a whopper crop off of 3 acres.  Between the flooding and my inexperience in prepping the field in the fall and planting it it was very lackluster. I tried to pick up rocks but there were a lot and the pickup bed was full of gravel for fencing, the hay and rocks were starting to cause the safety chains to drag on the ground.  I need to do some serious rock picking up here.   I will break out the arena groomer after the next cutting and work this field smooth and pick up rocks.

When I got to the barn I realized that I had not disposed of a winter’s worth of hay cord, that took a while to get them into old feed sacks.  I then had to move last years hay over to the front so we will use it first.  It is old and dry so I will use it as feed/bedding once we get the barn cleaned out.  I unloaded trailer and was about 50% done when it started to rain again.  Mr Professional came by and helped me unload the trailer, I stacked it until there were 10 bales left and I just called it quits!  I was beat and tired and done for the day it was dinner time anyways.  We only got 7/100” of rain Friday night.

One thought on “Haying for now”