It’s been a long week, I have kept notes so I could keep track of all the things that have happened.  Monday evening after dinner I went out and turned all the hay.  It just keeps raining.  The hay is not very good after all the rain and flooding.  I need to get it up into bales so the grass underneath can come up and I can get a good second cutting.  I worked until dark and got it all turned and in neat rows.  Mr Professional came out during the day and worked on setting wooden posts in our field closest to the barn lot, I would like to get the sheep and horses off of the hay pasture.  They keep eating the barley sprouts. 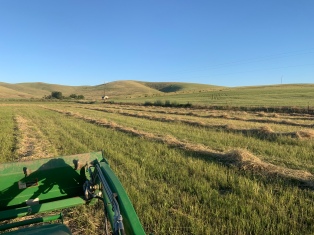 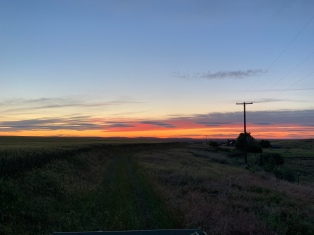 Tuesday after work I went out to the field and got the baler to work.  It’s a learning curve and I had to get my memory back up to speed after last year.  It is not quite the same critter as the string non-hydraulic one I had last year. I got it to make about 20 bales up in the triticale before it got dark.  I was happy but I have learned there are some things that are not easy to do in the dark and baling is one of them, seeding is the other.

Wednesday after work I went out to check on Mr Professional.  He was hot!  He had broken 9 shear bolts already and the hay was too thick.  It was a constant battle.  I went out after dinner and threw the hay back out.  No rows, the tractor carriage is too low and the underside hits the hay pile.  I really need a side pull but I did not think of this.  I may be able to accommodate this at a future time.  The real answer is just don’t row it.  Just throw it around and pick it up with the tractor.  The little baler does better if it is not plowing through super thick material.  It can grab a bunch and pull it in and shear the safety bolt before you know it.

Thursday I had off and Mr Professional and I had to go to town to find a bolt as one had broken on the arm for dumping the bales.  The arm got bent in shipping and I did not think it was a big deal.  It is turning out to be a problem.  I will need to order a replacement soon.  I forgot about it when I placed the big order last week.  We may have found the right size shear bolt at hardware store but we did not have any to compare.  We left them at home.  When we got home I found the dozen spares I knew I had ordered last year, they were not with the others.  It took us 2 hours to clean off the baler, replace the shear bolts and grease and oil it so it was ready to go.  I baled about 100 bales and only broke two shear pins, one low and one high.  I hit some wet grass and sheared the lower pin.  After spending 30 minutes digging it out I just gave up.  It was dinner time and I was beat, I took it all back to the shop, we can get it ready tomorrow morning.  Mr professional and the kid worked on the fence.  My manure clamp on hooks for the tractor bucket arrived!  I used them to move mud and hay away from the fence, they are great!  I am thinking that cleaning out the barn this year may be a lot easier than normal.   The tractor can push the spikes into a pile of mud and hay where I never could have gotten it into the bucket before.  The only thing is it makes the tractor pretty front heavy, I need to attach the box blade on the back for counterweight.